Thoughts from a veteran PC builder

This guide has been purchased and maintained here:

.why you should install a ramdrive right now

Why you should install a RAMdrive:

1. It can increase your browser speed up to 20%. Just use it for this reason alone!

2. It will increase the speed of installs, and countless other windows applications that use the temp folder (which is most of them). 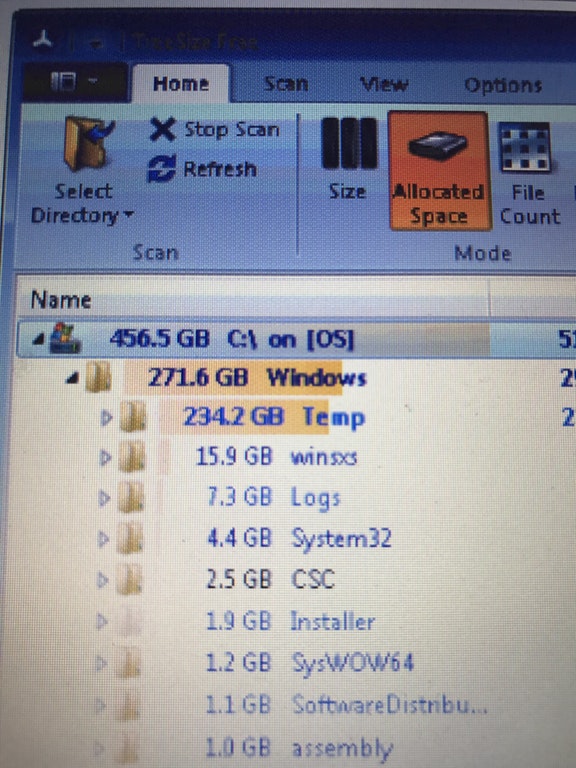 It’s best if they are wiped @ every reboot.

4. If you move large files around (Audio, video clips), into and out of programs, RAM Drive, the speed at which you can open, edit and save files will make your jaw drop: Real World Example:

Obviously you can’t save stuff permanently to a RamDrive, (unless you select that option, which will increase shutdown times) ram is wiped when you reboot.

5. If you have an SSD, a RAM drive to reduce the number of writes (from windows temp and browser cache) on your SSD so the performance will not degrade as fast over time. Here is the seminal article that talked about SSD performance degrade over time. Sure they’ve gotten a lot better, but better is not perfected, and you can still kill even the most current drives by too many writes, so why not install one if it’s free, increases drive longevity, and speeds things up? 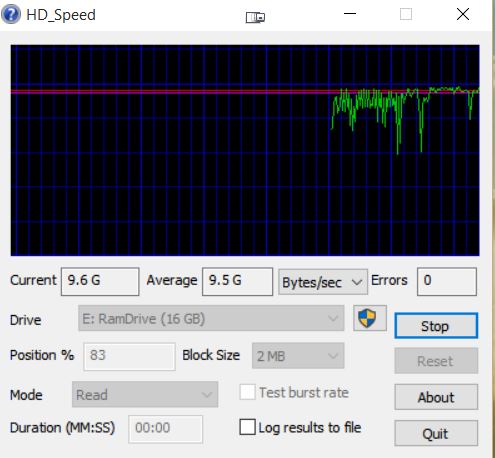 With all that power, this is how to best utilize it. Check out your Performance tab of Task Manager (CRTL + Shift + ESC), right now, now using anywhere near all your RAM are you? Not very much? Good. Let’s use just some of it.

According to this benchmark site, SoftPerfect Ram Disk is the fastest RamDrive software there is, and it’s newly freeware. Win win.

UPDATE: As of November 2016, v4.0 of SoftPerfet’s RamDisk is NOT FREE however v3.4.8 STILL works like a champ. I’ve hosted it or you can download it from me or here. (Filehippo.com)

My old RamDisk using Dataram’s software got about 6.3GB/sec. Using the exact same everything hardware, I now get

a wopping 9.5GB/second. I had not idea which RamDrive software you use can make such a big difference.

After you’ve downloaded and installed the software. You are going to want to create an image: 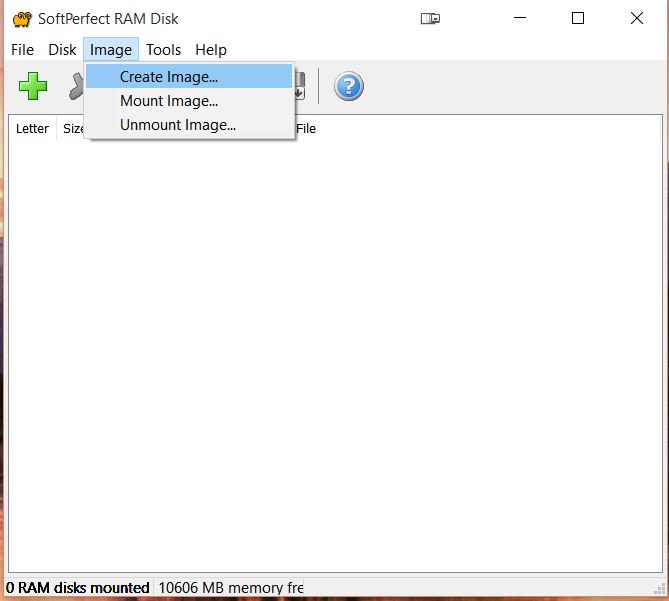 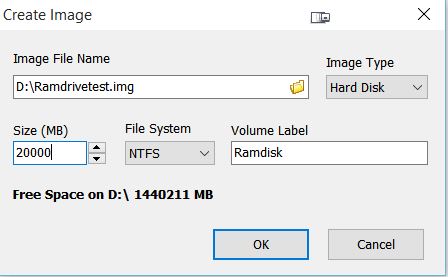 This tool a while, there is no progress bar, but I saw in Resource Monitor that it was writing the new drive at about 30MB/second. For a 20,000MB image, this is over 11 minutes. Note: It would not let me create it on my SSD, so I made it on my HDD, then transferred it over.

If you have 4GB of ram, I recommend getting more ram.

Once created, move the RamDrive.img to the SSD on “C:”

Then mount the image. (Green PLUS), make it look like so: 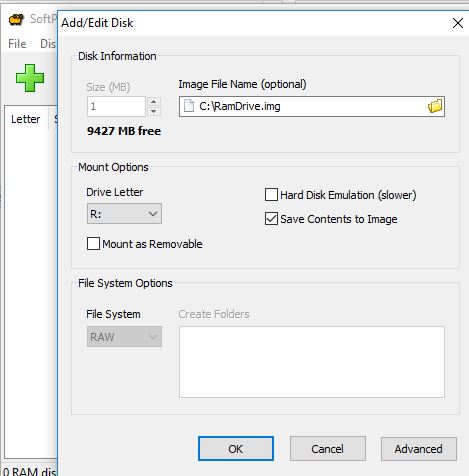 Then the drive shows up in My Computer, and you have to format it NTFS, and then I adjusted the RamDrive to whatever path I wanted in Disk Management.

Then set the windows’s Temp folder to the RamDrive.

Next to speed up your internet browser by moving Chrome browser cache to your TEMP Ramdrive. (Firefox directions here)

First I like to create a folder called “ChromeCache” on the RamDrive. Then with just the new “temp” folders and “ChromeCache” folders, I save those to the new image: 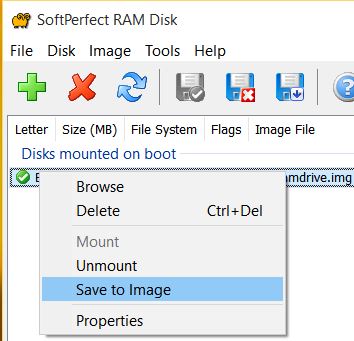 All you have to do is make a symbolic link to the new folder. this is the easiest method.

Make a little text file and rename to to .bat copy and paste this text in the text file AFTER you have edited the appropriate information:

Where “R” is you RAMDrive and ‘YOURCOMPUTERNAMEHERE’ your profile name (Go to C:\Users\_________ and select the profile you are using, it’s not the public folder). Save the text file, and run it. You should see a little black command prompt screen open and close really fast. That’s it, you’re done! Now open up the “temp” folder in the Ramdrive (“R:/” in my computer and open up Chrome and go to a few webpages. You should see lots of little files start to show up in the ramdrive’s temp folder:

Now you are done there too! That’s it for most users. Reboot, verify everything still works, drive letters are preserved, and enjoy a faster computer.

If you are a power user using Photoshop or video editing:

Also check any other applications such as Photoshop:

or any other similar application that you can select the RAMdrive as scratch disks, etc.

I recommend at least 12GB of ram for a midlevel power user with an SSD. 4GB for a RamDrive, 8GB for everything else.

Heavy audio/video/photo editing user: 32GB with 16-20GB as a RamDrive. You will love it. You will save so much time.

Note: If you use windows 8 or 10, you may want to disable “hybrid boot” which will make the contents of your ramdrive be wiped upon reboot.
Additional Setup Required for SSD users:

Once you’ve setup a RamDrive, there are a few other things you need to do to setup your SSD proper:

1. Uncheck “Allow files on this drive to have contents indexed in addition to file properties”

Optional. There is a debate going on if you should disable your swap file or not. I’ve done it for well over a decade, and had zero problems. You can google it yourself and decide:

Con: 2009 Lifehacker article. “The big problem with disabling your pagefile is that once you’ve exhausted the available RAM, your apps are going to start crashing, since there’s no virtual memory for Windows to allocate—and worst case, your actual system will crash or become very unstable. When that application crashes, it’s going down hard—there’s no time to save your work or do anything else.”

That’s why people say don’t do it? Because someone with 6GB of ram was worried about running out of ram? HE SHOULD BE WORRIED! I think we can decide for ourselves if we are running out of ram. With 64GB of ram, I never ever ever get anywhere close to using all my ram. He wrote this when he had 6GB of ram! Of course you shouldn’t disable your swap file with that amount of ram! pfft.

When I originally wrote this (2012-2013), fast RAM was cheap ($20 for 8GB 2133) and I was telling everyone to MAX OUT your ram now, because, as we’ve seen it before, I predicted that RAM manufacturer would start colluding (again) to raise the prices.  Sure enough, now it’s end of 2014 and ram has tripled in price. So now would NOT be a good time to snag a big pile of RAM, but what can you do?

I am a google poweruser and use Google Backup and Sync to backup hundreds of thousands of files, pictures, etc. I started to notice huge amounts of writes on my SSD as I sent a good TB or so to google. So what to do? Well, do the exact same thing we did with the Chrome Cache. I tracked down the offending folder.

Then make this .bat file and run it as admin (change NAME for your name)